Before the Greeks. Before the Romans. - graffiti goose photography

On the trail of the Etruscans

It's a mystery. Theories about from where the Etruscans originated continues to be up for debate. Some believe the earliest (known) inhabitants of the land making up the Italian peninsula emerged from the nearby island of Sardinia. Others stick firmly with the idea the Etruscans emerged from where they primarily are known to have lived -- around the coastal areas between the states of Lazio and Tuscany.

Regardless of their origins, what we do know about them is confirmable by what they left behind. The Egyptians left us the Pyramids, the Etruscans left   burial sites (of which there are many) give hints about their ideas relating to the afterlife.

Syracuse once rivaled Athens in size and importance. The 2700-year-old city is layered with memories from its ancient Greek past. It is noted for its Sicilian Barque architecture, Roman and Greek Amphitheatres The Maniace Castle, Cathedral, Temple of Appolo and Fountain of Diana and have attracted a variety of creatives, including Virginia Woolf who found Syracuse so alluring, she considered not leaving.

Sicilian expansion by the Greeks...

Roman Forum is a well-preserved ancient site in Rome that showcases an outline of the city's former self. The Forum space was used to sell goods at the market. As space where citizens gathered, it was harnessed for transmitting information. Public speeches, trials, elections took place there and eventually shaped it into one of the most celebrated meeting places in the world.

Why do we study Rome? By 1000 BC -- thanks in no small part to an array of water systems (aqueducts) ROME swelled; its population hit an estimated 1 million. Consider that it was entirely common to die from illnesses linked to poor sanitation,  to facilitate such a massive population would be suicide without a well-thought-out and organized city.

City planning was a civic duty as prescribed by the Greeks. The Romans took the task to an unthinkable level. Afer Rome, they imposed their organizational skills over Western Europe with complex road, laws, currency and ideas.

Decadence disguised as grace, the Vatican is a radical institution that claims ownership over some of the most significant works of art in the world.

Although Rome did tolerate a number of diverse beliefs systems, Pagan and polytheistic based "religions" dominated Christianity to the point that it became altogether common for Christians to be openly persecuted (and the practice illegal).  For years, early Rome was a grizzly city. To grow the population, the city doors were open to all walks of life, namely, this attracted unruly types.

After Cesar Augustus converted Rome into the center of an ever-expanding empire,  altering it from brick to marble, the growing population was eventually "best served" within the confines of a monotheistic society where the divine rights of a single anointed ruler bridge the gap between the cities of Heaven & Earth.  The Empire readdresses Christianity, making it the official religion.

By the 1600 and 1700's this will become the purpose for a recognized separation of Church and State.  Throughout the Middle Ages,  a  law can be imposed and without question, the law is applied both as a moral and civil obligation. Such circumstances leave no room for reasoning or logic. No room for reason. (This method of law continues today through the Vatican. When, for example, the Pope, declares abortion an abomination, his followers are expected to act in accord without question)

Throughout history, the outcome of this can be seen through a number of ways, not the least of which is during times of Crusades. To assert its authority and absolute rule, trials wherein the accused were offered no recourse, either submit or die (or submit and still die)  were common.

This is not to say the decades preceding the Italian Renaissance were dark as historians from the 1900's would like to have you see them. It was a flourishing time; trade with major ports Cittitevechia, Genoa, and Sicily were opening pathways for Muslim invention to flood in, bringing with them advanced scientific and medical knowledge, music, maps, and books to name just a few things.

I stepped off the bus prematurely which left me walking a pretty good distance (and a hill to climb) before reaching the one-time social/civic center of Malta. The medieval village of Mdina is surrounded by swaths of patchwork farmland, stone walls, dry wind, and the distance sea. The inner pathways of the village are alluringly alive and inviting.

Tides of Change ... the Italian Renaissance 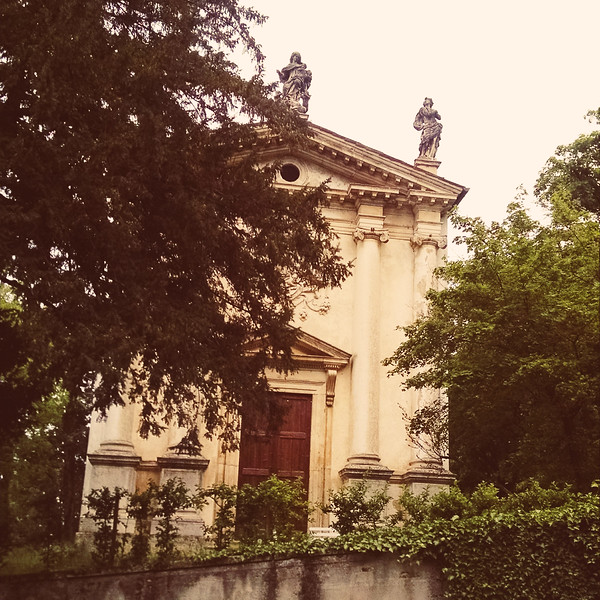 Inspired by the Pantheon in Rome, Villa de Rotunda is noted to be Andrea Palladio's most striking achievement. It is the inspiration for several structures around the world, including Thomas Jefferson's home in Viginia, Montecello.